Why Study in Europe?

Europe is rich in innovation. Some the world class companies in technology/design are from Europe. European Universities offer a variety of programs (recognized all over the world). The European Union submits over 44% of the total number of patent applications worldwide. Some countries offer free education! Cheap and tuition-free higher education is offered in Germany, Norway, Sweden, Denmark, and Finland. University of Oxford is the oldest university in UK (established in 1096). University of Bologna, Italy is the oldest university in Europe (est. 1088). Sweden, Finland have highest researchers to population ratio. 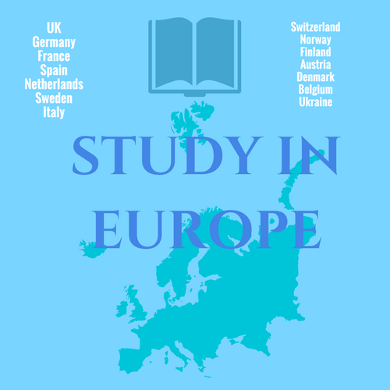 What are most popular majors in Europe?

Which countries are top destinations for international students?

Admission requirements for some universities

Average salary for INSEAD MBA graduate in 2017 was USD 105,000. Average GMAT score for admitted students was 709 (2018 Class). HEC Paris, IESE Spain are some of the top rated management programs in the world. Many students from US get a degree from these management programs to get International Exposure.

First and foremost, one of the largest requirements to studying in Austria is the ability to comprehend the local language: German. Majority of the courses and instruction provided through universities are offered only in German; Spain has been listed as the third most popular countries for international studies, with almost a third of those students originating from the United States