Czech is a developed European country with advanced economy, with a population of around 10.5 million. It's capital/largest city is Prague.

Most private and public schools evaluate credits in accordance with the ECTS grading system.

Czech Technical University, Prague is one of the Oldest universities in Europe. It's has a good ranking and has strong ties with major companies like ABB, Siemens, GE. 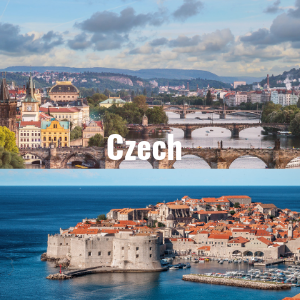 The main language is Czech (for most of the courses), however number of programs delivered in foreign languages (especially English) is increasing (TOEFL/IELTS/GRE might be required for admission to graduate (Master's/Post Graduate) courses.

Higher education at public and state institutions is free of charge for citizens of all nationalities (Administration and other fees might apply, also courses in English might have fees ~6000-7000 Euro/yr). Fees in Private institutions may vary from 1500 Euro to 12000 Euro.

Masters degree can range from one to three years.

Students from non-EU countries must have an international insurance plan. EU Students can have European Health Insurance Card (EHIC).

Salary by occupation in European Countries