Is Education Free in Europe?

Answer: Many countries offer free education (almost free - there might be some minimal fees that you have to pay. You need to cover your living costs). Yes international students are included under free education. Yes you are eligible to receive scholarships or stipend (if available). You are allowed to work 20 hrs/week (in most countries). Many courses are offered in English. Note: Only tuition and fees is free, health/travel and living expenses are not covered.

If you want to study in Europe, your parent's income may not be the deciding factor in the quality of education you receive. There are world class tuition free universities (for international students as well) in European countries such as Norway, Sweden, Germany, Denmark, Finland. You might have to give administrative fees of few hundred Euros. If you are planning to study abroad this might be your cheapest option to get a cheapest degree from top universities in Europe.
Note: Living costs/Health insurance etc are not covered (You can still get scholarships based on availability but there is close to zero tuition fee!). 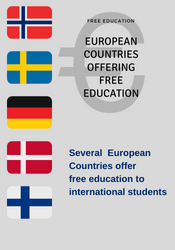 International students flock to Norway to study as they get a high-quality education at little to no cost. The Norwegian government finances education with taxpayers' money so international students along with native students can enjoy a free ride at state universities. But the catch with studying in Norway is that living expenses can be high with NOK 8,900 (approx. 1,200 GBP) needed just for subsistence per month. This will cover room and board, clothing, healthcare, transport and miscellaneous expenses.

The Norwegian Universities and College Admission Service (NUCAS) is the coordinator of undergraduate admission.

University of Oslo
The Academic Ranking of World Universities (ARWU), or otherwise known as the Shanghai Ranking, has ranked it the 67th best university in the world. The University of Oslo has several outstanding academics and alumni, spanning many disciplines. The university has produced five Nobel Prize winners and is institutionally connected to some of the world's most prestigious prizes. Between 1947 and 1989, the Nobel Peace Prize was awarded at this university. Furthermore, it is the only university to host a Nobel Prize ceremony.

Up until 2010, Sweden had been one of the few European nations countries that had no tuition fees. It did not matter what your nationality was as Swedish taxpayers would foot the bill. But all good things come to an end, and in 2010, the Swedish parliament passed a law to charge tuition and application fees for non-EU/EEA students. At the same time, scholarship programs were offered.

Even though there are no tuition free universities in Sweden anymore, a large number of these institutions offer full scholarships (tuition waivers, etc. actually ) for international students.

Top Tuition Free Swedish Universities
This research university in Uppsala, the country's oldest having been founded in 1477. It ranks among the best universities in Northern Europe, and it is quite prominent in international rankings too.

The university became considerably recognized during the rise of the Swedish Empire at the end of the 16th century.

German universities have only recently started charging tuition fees for undergraduate study programs. Right now, just 4 out of 16 Federal States - Baden-Wurttemberg, Bavaria, Hamburg, and Lower Saxony- charge tuition fees that are as little as 500 Euros per semester. All other federal states just request a small semester contribution of around 50 Euros with no tuition fees charged.

Tuition fees for Graduate Programs
Tuition fees are charged for Master's programs. Here the fees range from 650 Euros to 3,000 Euros per Semester. The estimated cost of studying and living in Germany is much less than

Most colleges in Denmark offer free education (for Citizens, EEU, people with certain visa types, etc.is). Major Universities (which are one of the best in Europe) are the University of Copenhagen and University of Kiel. All Danish citizens are also offered tuition aid/scholarships.

Currently, there is no tuition fee for studying in Finland. From 2017 non-EU/EEA students will have to pay tuition fees (for courses offered in English). Each University will have its fee structure. The University of Helsinki and the University of Turku are top ranked universities of Finland. Students need to cover their living expenses.

Education in Greece is also free for EEU nationals (for most programs), Even international tuition/fees is quite low as compared to many other countries (like US, Canada, UK and Australia).

Norway and other Nordic countries. On average, German students spend roughly 800 Euros for accommodation, transport, food, and other necessities. Germany's research driven programs are a top draw, and they have been the inspiration for today's American graduate schools.

Countries to Study in Europe

Salary by occupation in European Countries